Non-stop. That’s how it’s been this year at Park West. Not that we’re complaining. 2017 has brought with it exciting developments that have linked us even closer with our tenants and the people in our community. It feels good to be connected.

NEW-LOOK WEBSITE
In keeping with a busy year full of new partnerships and breakthrough projects, our online presence received a brand new look. ParkWest.ie now offers a fresh, modern design that is optimised for mobile users. Our interactive map lets prospective tenants compare our prices with other business parks and showcases the great value on offer in Park West. We have also enhanced our Business Finder, making it even easier to search our database of over 300 companies.

NEW NEIGHBOURS – GLOBOFORCE
2017 also saw pioneering social recognition company Globoforce moving to the flagship premises in Park West in what was described as the single largest letting in Dublin this year. “We chose Park West because of its central location between Dublin city and the surrounding suburbs and counties, making it easily accessible for all our employees,” says Niamh Graham, Vice President of Global HR. The company puts a premium on employee well being and has turned its office into a human-centric space featuring a games area, coffee bar and a wellness room.

PIGSBACK.COM JOINS THE FAMILY
Another new arrival to Park West was Pigsback.com, the e-commerce and online marketing solutions provider. The company relocated from City West Business Campus to take advantage of Park West’s prime location and transport links. What they didn’t quite expect, however, was the real sense of community they found here. “Here at Pigsback.com, we pride ourselves on being a progressive, friendly and service-orientated business, which also reflects the atmosphere of Park West as a community,” said Michael Dwyer, CEO of Empathy Marketing, the company that operates Pigsback.com. Since the move, Pigsback.com has enjoyed a strong growth period, increasing its active audience to 570,000 people in Ireland, and employing 30 people.

AND EVEN MORE NEW TENANTS
Park West has seen the arrival of several other high-profile tenants in 2017, cementing its reputation as a hub for innovation. Heavy hitters such as Monster Energy, Heavey RF and Sysnet Global Systems all recognised the advantages that Park West offers: competitive rents, excellent amenities and first-rate transport links, and it’s been immensely rewarding for us to see all these businesses joining the fast-growing Park West community.

AND ON ANOTHER NOTE…
We can’t let a round-up of 2017 go by without mentioning the continuing success of the Phoenix Park Tunnel. Re-opened in November 2016 after a €13.7 million upgrade, these 719 metres of track once again link stations north and south of the river Liffey. Now, people can step onto a train at Park West/Cherry Orchard and be whisked straight into the city centre, via Drumcondra, Connolly Station, Tara Street, Pearse Street and terminating at Grand Canal Docks. From Park West to the city centre in just 20 minutes… commuting has never been easier!

2017 has been a rewarding year for all at Park West and we look forward to what 2018 will bring. 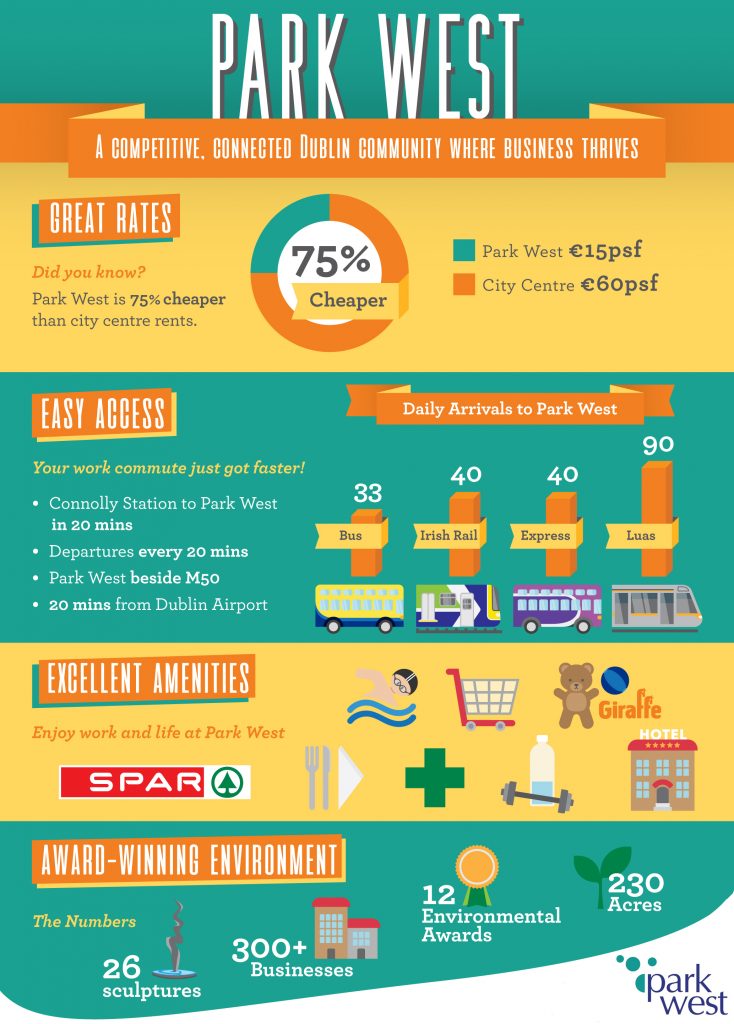